We had a late start yesterday morning, only arriving at Seal Island at 11:30. We anchored immediately upon arrival. There was a small swell with light winds blowing from the South West. Water temperature measured 14°C and vertical visibility was 6 meters. Within 10 minutes of dropping anchor we had our first shark up to the boat, a small male around 2.5 m, then a second shark shortly after measuring around 3.2 m. Both sharks circled the boat for a few minutes, giving us a good opportunity to record data, capture fin ID’s & underwater footage.

We then waited about an hour before another big shark approached the seal shaped decoy. The shark bit the decoy once and then dived back into the depths below. We are confident this was ‘Ike’ – a huge female measuring around 4 m, last observed on the 2nd July. We were unable to get fin-ids or underwater footage, but were able to identify her from unique scarring on the tail. Shortly thereafter we had another beautiful shark surface and circle the boat for around 10 minutes. This shark was what we call a ‘player’. A player is extremely inquisitive and will circle the boat showing no interest in the bait or decoy, but focus their attention on the boat and motors instead. They try and mouth the motors and underside of the boat as they are very curious. We had a lot of fun with this shark as it was very interested in checking us out. All in all a great afternoon for white shark research.

This shark, the player, was eyeing out the Gopro and smiling for the camera. Can anyone say cheese? 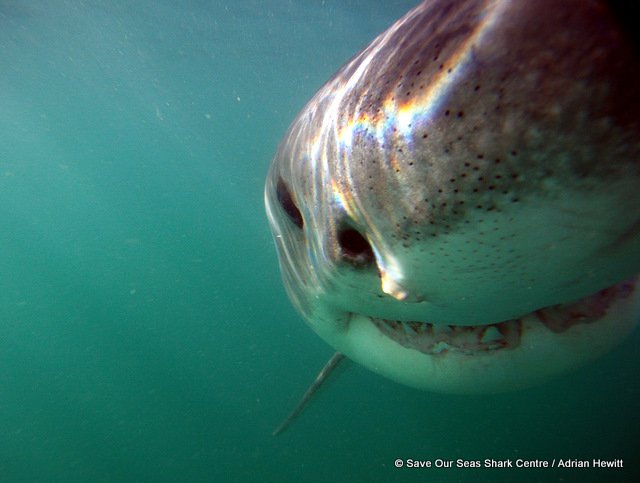