Yes, that’s how some people would describe the African Penguin (Spheniscus demersus). 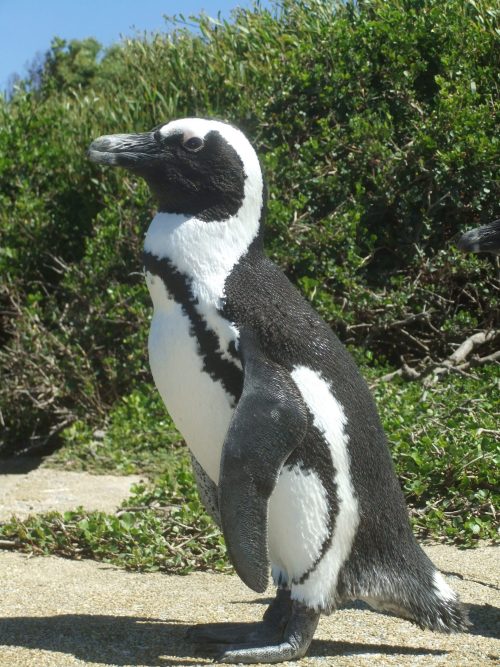 Penguins are unable to fly and walk awkwardly on land but are superbly adapted for swimming and diving in the sea. Their wings are hard flippers enabling them to ‘fly’ through the water at speeds of up to 20 km/h. Their normal swimming speed is 5 km/h. Penguins regularly dive to depths of 30 metres to catch small swimming fish such as pilchards and squid. They can stay underwater for up to five minutes when feeding on a shoal of fish. 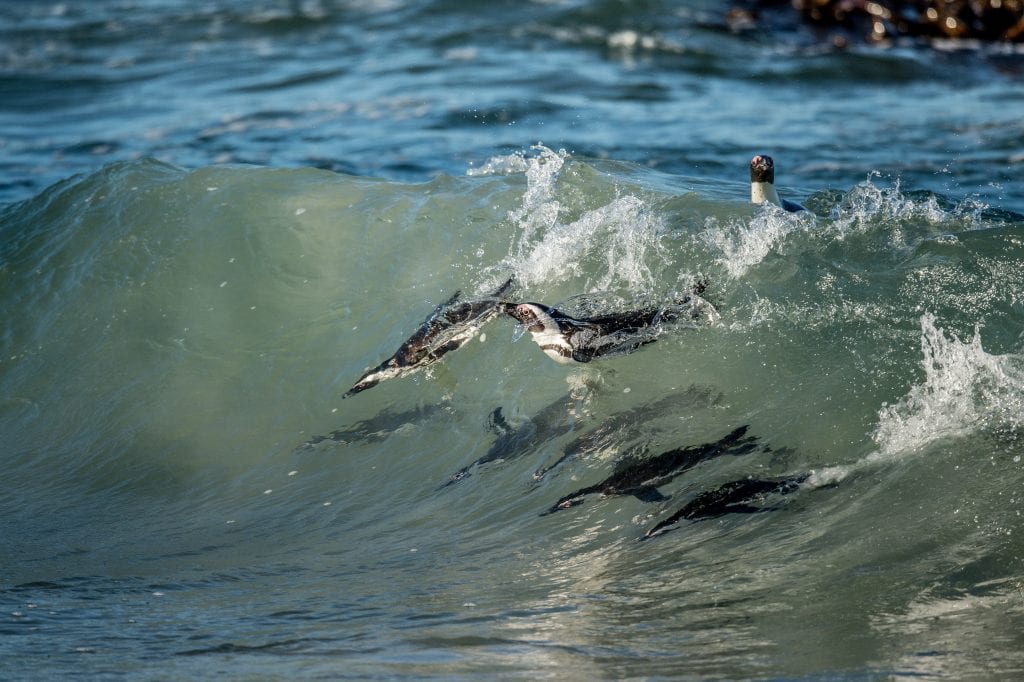 Their feathers are small and tightly packed trapping a layer of air against the body which keeps them warm. The bird has a gland above the base of its tail which produces a special oil for waterproofing the feather layers so that water cannot penetrate. Penguins regularly use their beaks to take oil from this gland and spread it over all their feathers. This activity is known as preening. 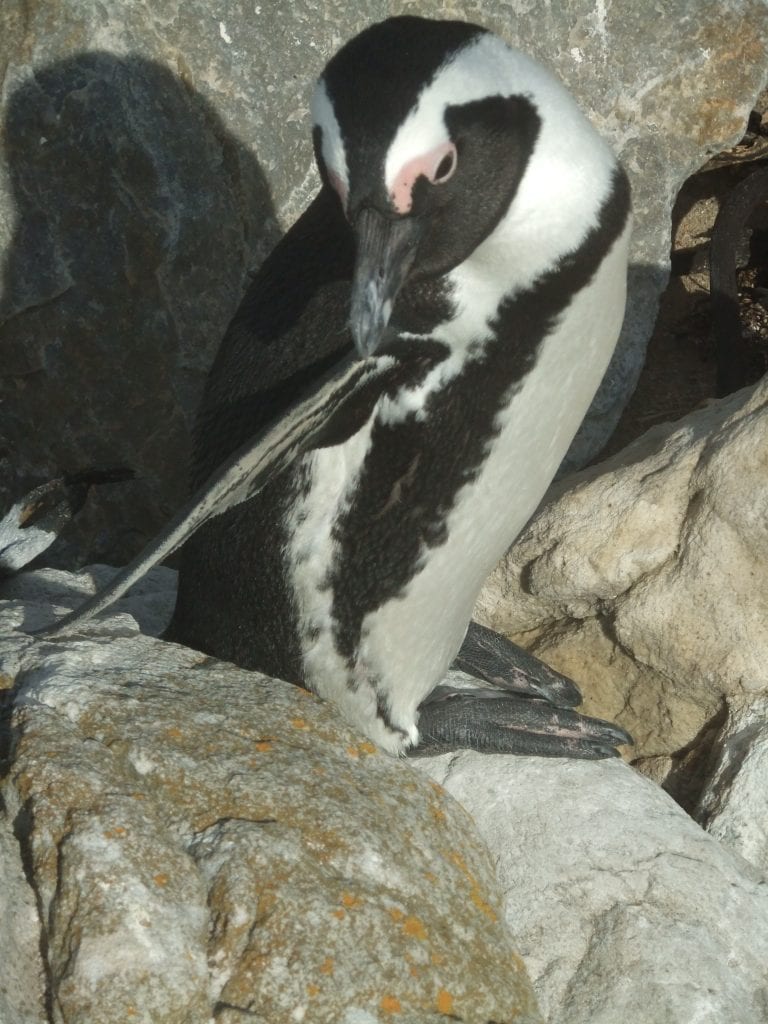 Penguins live on land while they are moulting (the process of replacing old, inefficient feathers with new feathers). They cannot swim to find food when they are moulting because their feathers are not insulated from the cold water. They gorge themselves just before the moult, gaining extra fat so that they can last the three weeks it takes to grow new feathers. Moulting penguins may look sick but this is a normal event once a year in summer. They become very bad-tempered putting up with the heat, hunger and itching! 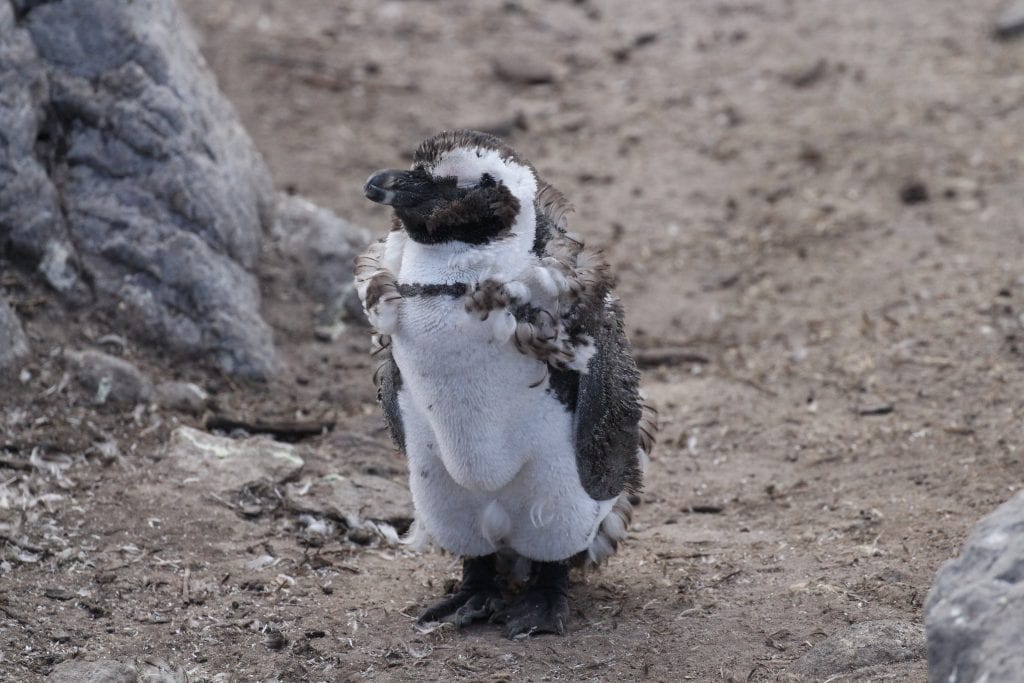 Penguins also come ashore to mate and lay their eggs. They use their webbed feet and beaks to dig burrows in the soil under bushes or rocks for their eggs and chicks. It is important to shelter them from the cold at night and rising temperatures during the day. The eggs and chicks must also be protected from predators such as mongooses and kelp gulls. 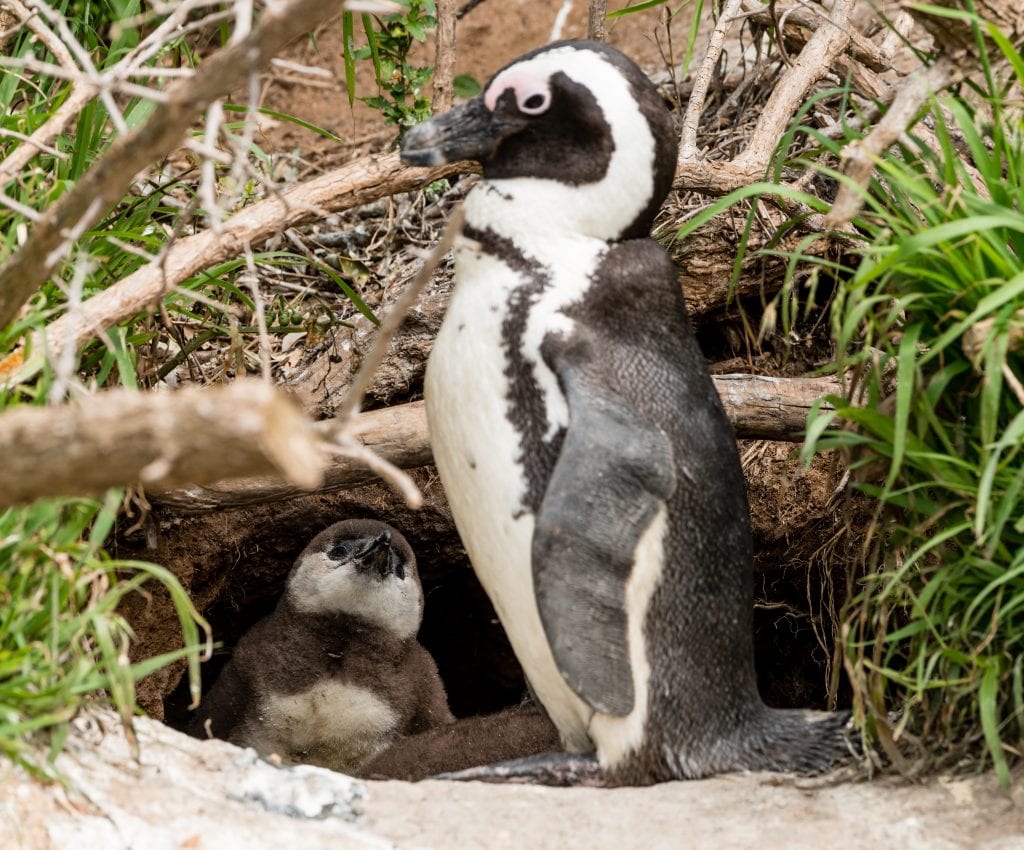 Penguin pairs will return to the same nest each year. The males make a loud noise, similar to the braying of a donkey, when courting and arguing over territory. This has earned the African penguin the nickname of the jackass penguin. After mating, the female usually lays two large white eggs. The eggs hatch after about 40 days and the chicks must then be fed for a further three months until they are ready to swim in the sea to catch their own food. 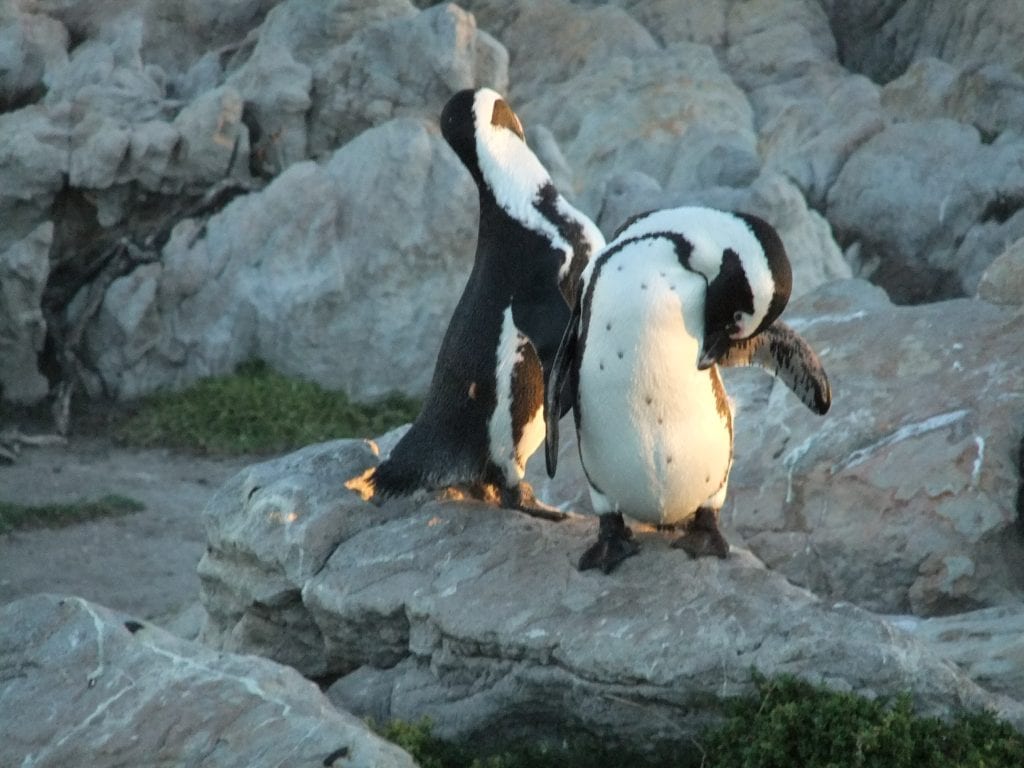 Newly hatched chicks are helpless and need to be kept warm. While sitting on the eggs (called incubating) and during the first month of a chick’s life, the parents take turns: one guarding their chicks at the nest while the other returns to the sea to feed. The chicks whistle and nibble at the throat of a parent returning from the sea to encourage it to regurgitate fish it had swallowed earlier. 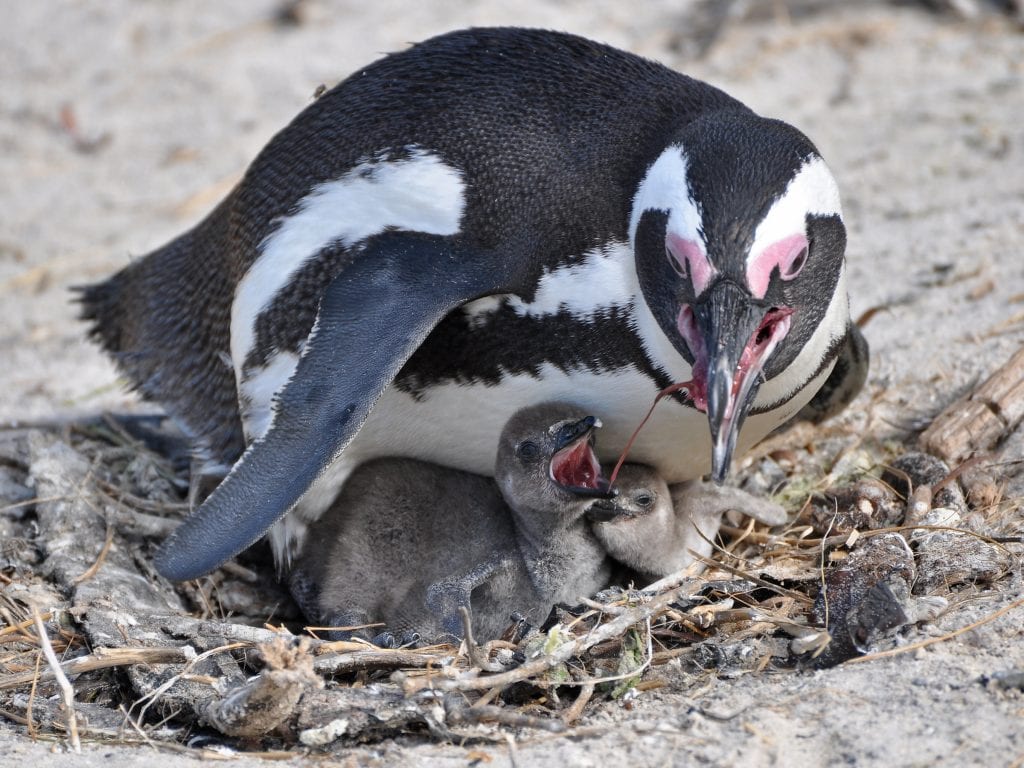 They soon grow a coat of fluffy feathers called down. Down feathers are needed for warmth but are no protection for swimming. 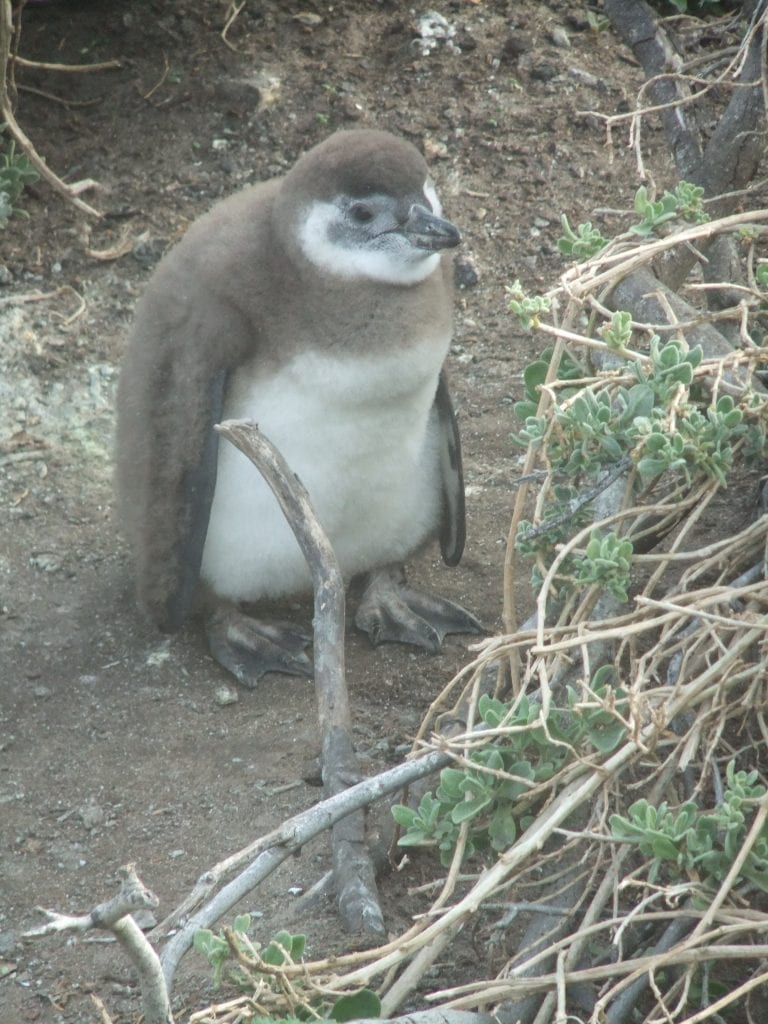 After approximately six weeks, the chicks grow their first coat of waterproof feathers and will be able to go out to sea to catch fish for themselves. This coat is a blueish grey colour so it is easy to spot a young penguin which is known as a ‘baby blue’. In the photograph above there are two ‘teenagers’ behind two adults. They will only get their adult plumage when they moult again a year later. 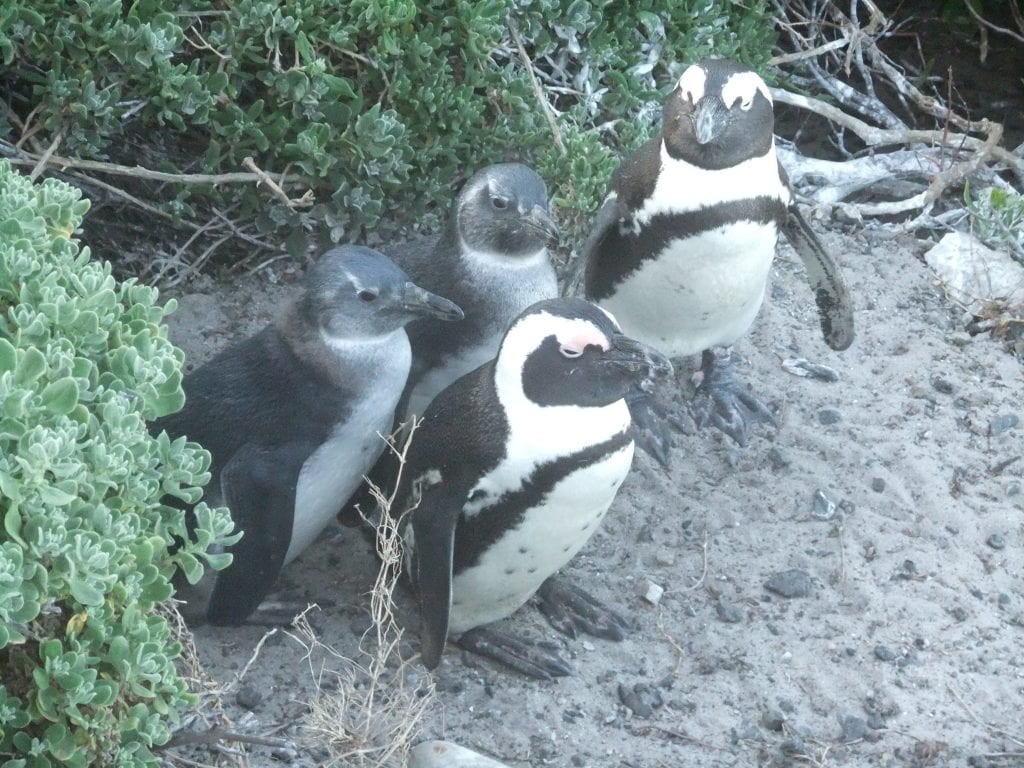 A colony becomes full of old feathers and smelly from thousands of bird droppings by the time chicks are fledged (have left the nest). The photograph above shows rocks streaked with white bird guano. 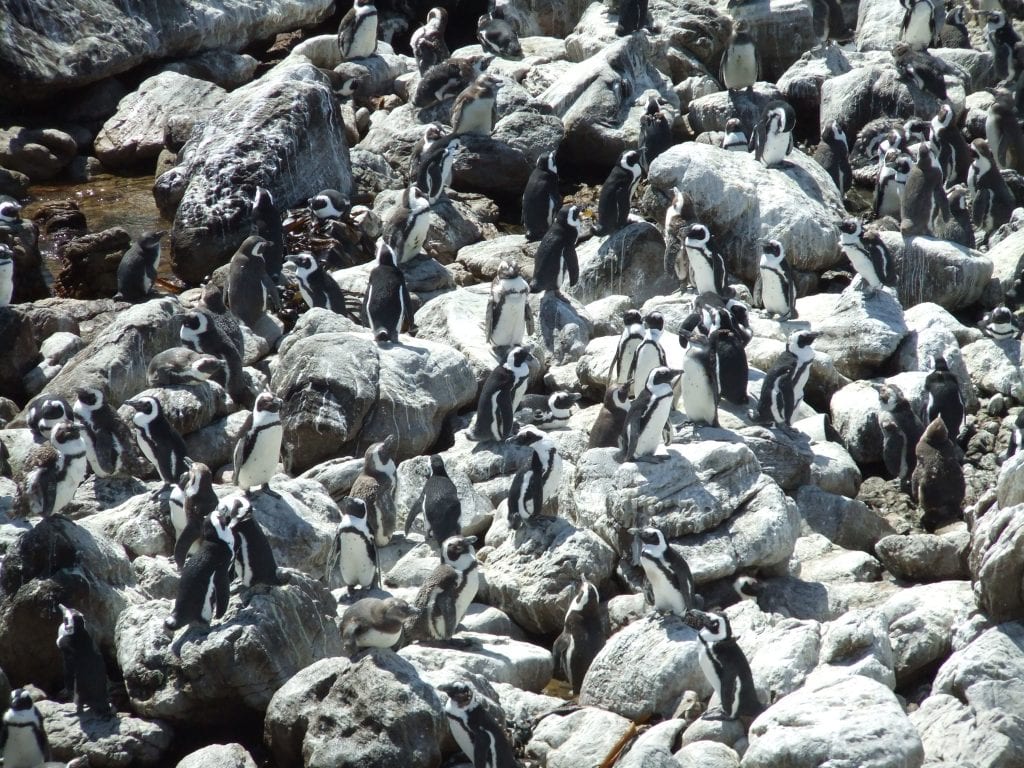 Penguins may look cute but should not be disturbed. They can give a painful bite with their strong beaks. The beak has a sharp hook at the end to ensure that fish cannot easily escape. 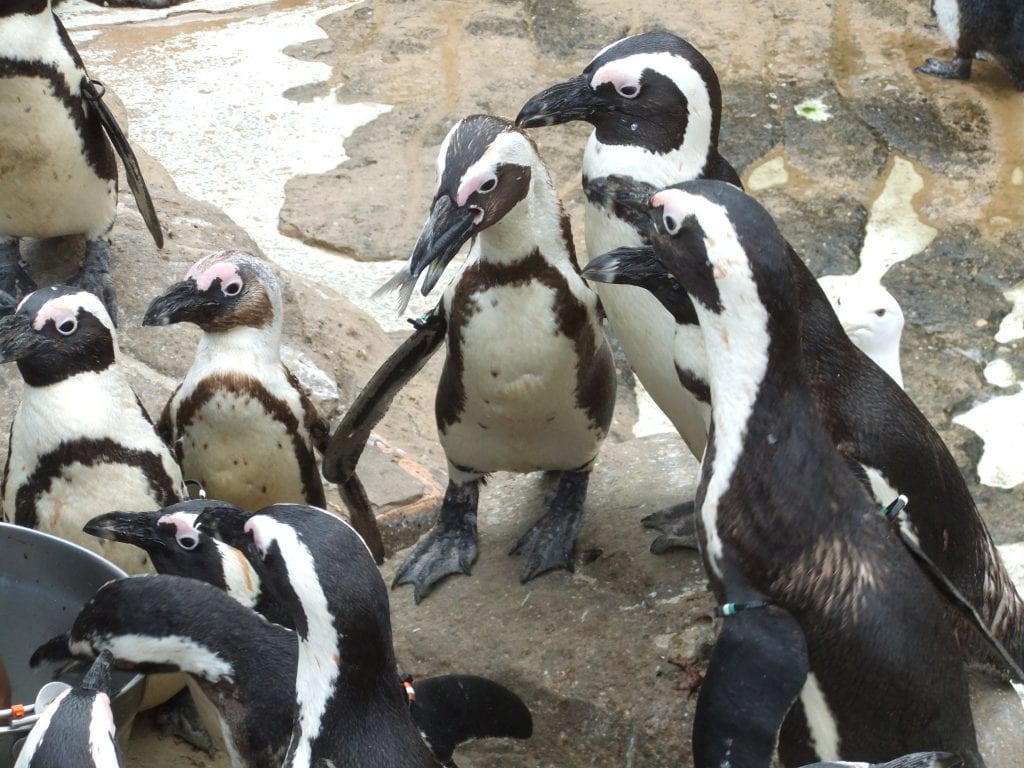 If you find an injured or oil-soaked bird on the beach, you can call the Southern African Foundation for the Conservation of Coastal Seabirds (SANCCOB) centre on 021 557 6155 or 078 638 3731. SANCCOB staff will take it to their rehabilitation centre in Tableview where it will be washed in a special detergent and cared for until it is able to swim again with a new coat of feathers. It is not easy feeding a wild penguin because a dead fish in a bowl is not the same as a swimming fish! A person has to hand feed each penguin with several fish. In this photograph, the bird in the centre is busy swallowing a dead pilchard that was fed to it. Notice that most birds have a tag tied near the top of one flipper. This helps to identify the bird and gives researchers valuable information about their movements when they are released and then seen again in new places. 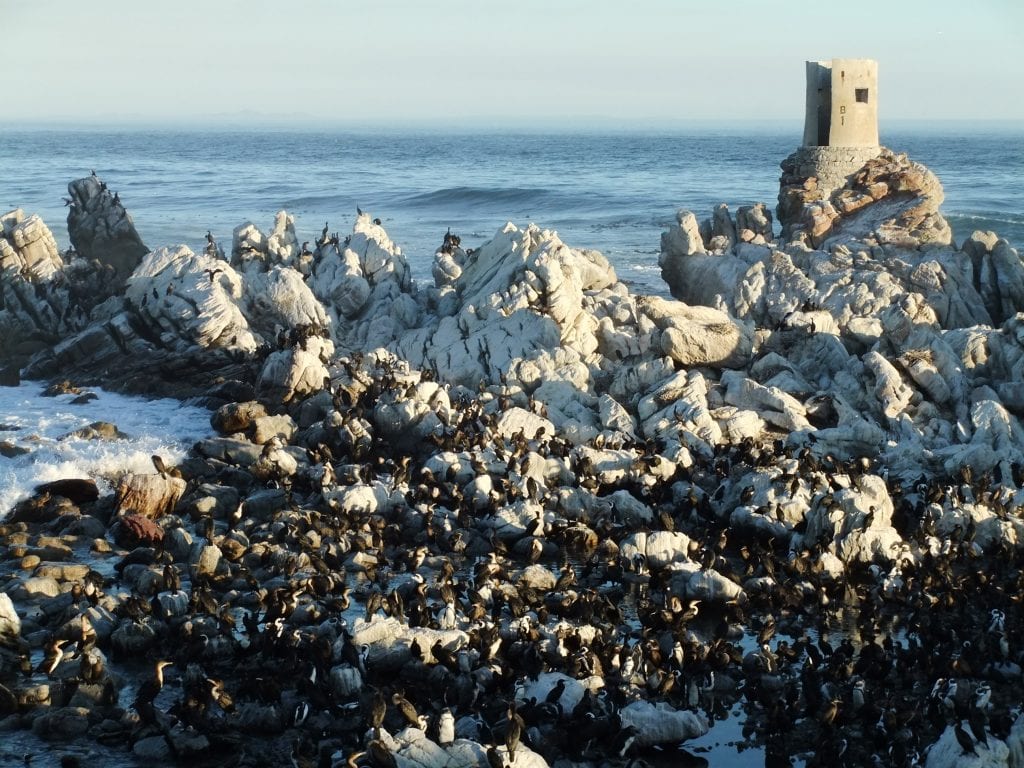 African penguins colonise islands close to the shore where there are fewer terrestrial predators such as mongooses and leopards. There are only two mainland colonies in South Africa and both are near Cape Town. One colony is at Boulders beach just beyond Simon’s Town and the other at Stony Point in Betty’s Bay (shown in the photographs below). People have put a fence around these colonies to try and protect the penguins. Visitors can pay to go in and view the penguins at a safe distance so as not to disturb them. 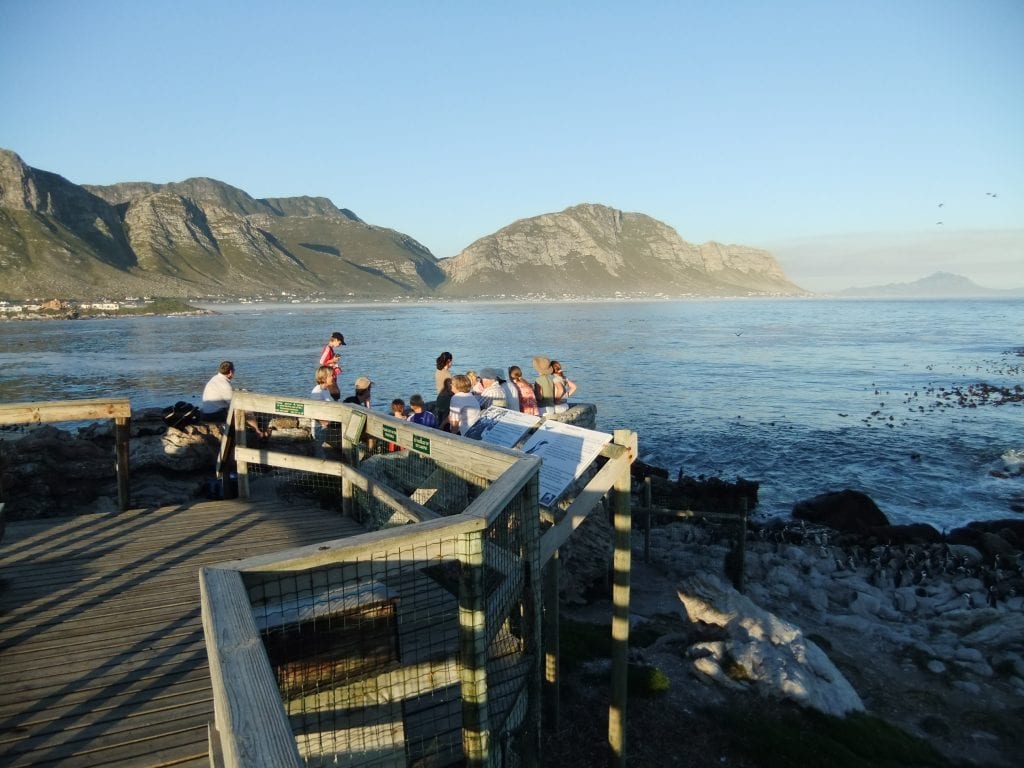 In the past, penguins made their burrows in the thick layer of guano (excrement) that they deposited when on land. Penguin numbers decreased rapidly when people collected their eggs for food and removed the guano for fertiliser. People may no longer do this but they still harm penguins with overfishing (reducing the food available to the animals), and polluting the water with chemicals from land and oil spills from tankers on the ocean.