Eye on the Tiger

It probably shouldn’t come as too much of a surprise that Sereia made headlines when satellites detected her off Indonesia’s coast in April 2020. Her whereabouts had been tracked since November 2018, when she’d been tagged by Dr Ryan Daly of the Oceanographic Research Institute (ORI) in the Ponta Partial Marine Reserve (PPMR) in southern Mozambique. At 3.15 metres (10 feet 4 inches), Sereia was already an impressive tiger shark to anyone following her story – but her 6,500-kilometre (4,039-mile) trans-oceanic journey catapulted her to shark stardom.

That tiger sharks are prone to roam is something documented by scientists using acoustic and satellite telemetry over the years. In one such study, Dr James Lea, CEO of the Save Our Seas Foundation, tracked 24 tiger sharks using satellite tags and showed that while they were happy to spend their summers cruising parts of the North Atlantic’s open ocean reaches, they preferred to overwinter on the Caribbean’s shallow coral reefs – a seasonal round trip that entailed more than 7,500 kilometres (4,660 miles) of travel. 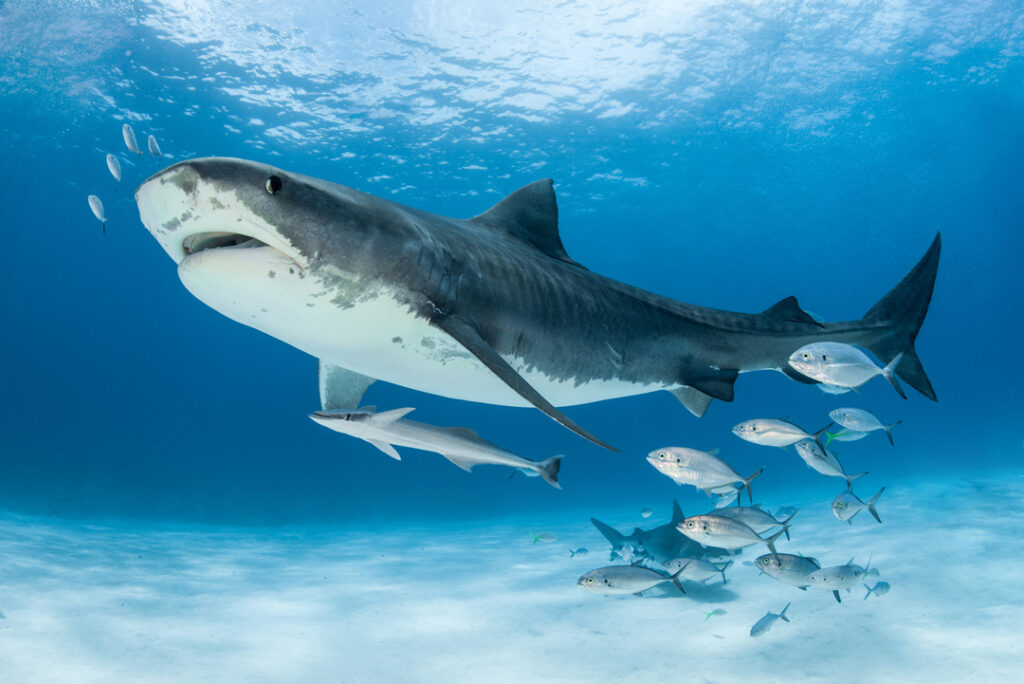 A tiger sharks in the warm waters of the Caribbean sea. These large predators help regulate the health of marine ecosystems. Their prey includes turtles, dugongs, dolphins and a variety of other species. Photo © Matt During

These headline-grabbing feats tell us two important things about tiger sharks in general: they are capable of long-distance migrations, often across entire ocean basins, and they move with relative ease across very different ocean ecosystems. While Sereia’s record-breaking swim is a milestone for her species (and anyone would empathise with a penchant for a coral Caribbean winter), we can say that rather than these being exceptional cases, most tiger sharks have a life history that is painted with broad brush strokes. They are generalists of the boldest kind. Found worldwide in tropical and subtropical seas, they live in habitats that range from shallow coastal waters to mysterious depths far offshore. Their diet is equally unfussy and has become the stuff of legend, its typical menu of marine mammals, fish, seabirds and other sharks is also peppered with garbage and terrestrial animals, according to some reports. Everything in the species’ life history points to a shark that can travel widely, mix freely and therefore (theoretically) interbreed, so we’d expect most tiger sharks to be genetically similar to one another.

However, new research published on 10 August 2021 in the Journal of Heredity, with Dr Andrea Bernard from Nova Southeastern University as the lead author, confirms the opposite: that tiger sharks in the Atlantic are genetically very different from those in the Indo-Pacific Ocean.

‘These results mean that Atlantic and Indo-Pacific tiger sharks, despite their ability to travel vast distances, have not intermingled to reproduce for a long time,’

explains Professor Mahmood Shivji, the director of the Save Our Seas Shark Research Centre (SOSF-SRC) and a senior author of this study. ‘This long-term separation between Atlantic and Indo-Pacific tiger sharks has resulted in them developing into separate populations, each with its own unique genetic diversity,’ he says. The study also confirmed previous findings that tiger sharks from Hawaii, one of the world’s most geographically isolated archipelagos, are genetically different from tiger sharks of the Indian Ocean. 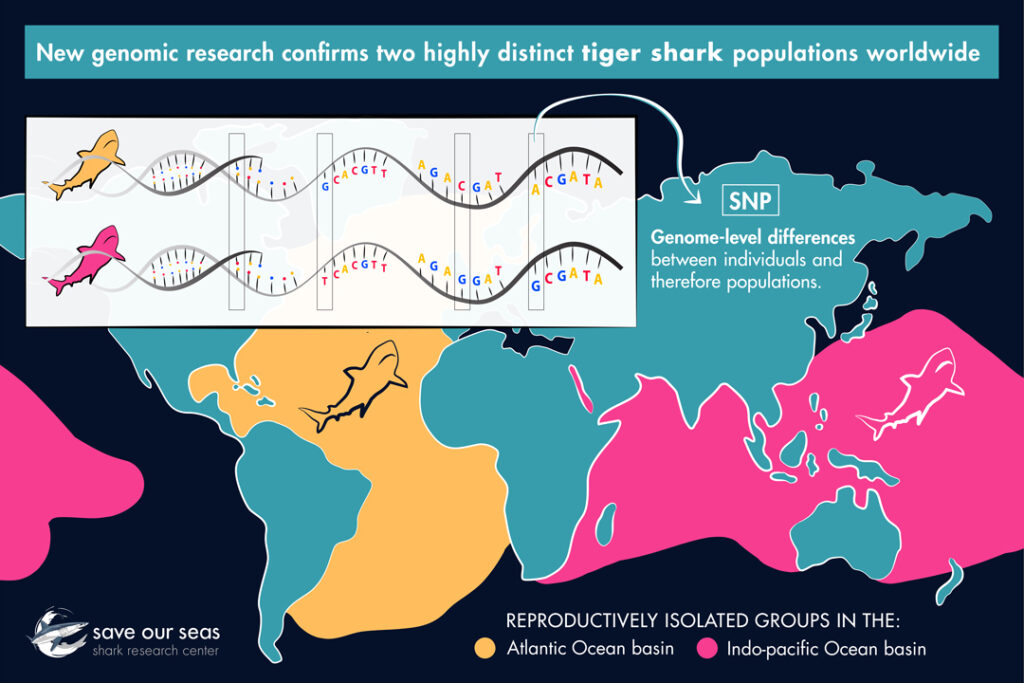 Infographic by Nicola Poulos | © Save Our Seas Foundation

What is so important about understanding (and conserving) tiger sharks?

Listed as Near Threatened by the International Union for the Conservation of Nature (IUCN) on their Red List of Threatened Species, tiger sharks occur in shelf, reef and continental slope ocean environments. They are also found in coral reef habitats and in sea-grass meadows. As we know, individuals can travel thousands of kilometres across the ocean and while they are generally found to maximum depths of 100 metres (328 feet), they are capable of diving much deeper and on occasion have been recorded at depths in excess of 1,000 metres (3,280 feet). When quizzed about the SOSF-SRC’s interest in understanding tiger sharks and their population genetics, Professor Shivji draws on exactly these generalist traits to highlight these sharks’ importance. ‘Tiger sharks are not only true apex predators that can travel massive distances, but they also occupy an unusually wide variety of habitats compared to other fish species,’ he says. ‘These traits make them likely to have a major role in structuring diverse marine ecosystems ranging from coral reefs to the open ocean. They also make tiger sharks a very interesting species to understand from a scientific and evolutionary perspective. Given their influential ecological role and their widespread movements that expose them to a variety of fisheries, science-informed fishery management of tiger sharks is going to be important to achieve global conservation goals. At the SOSF-SRC, we’ve taken a multidisciplinary science approach that encompasses field work as well as laboratory work and genomics to gain a holistic understanding of this important marine apex predator.’

We now know that tiger sharks are also important to us, bringing not only awe to those who choose to dive with them and a sense of wonder to those of us who are content simply knowing they cruise our oceans, but also potentially helping us to mitigate climate change. Research has been showing the important role that an apex predator like the tiger shark plays in sea-grass meadow habitats, controlling the behaviour of the turtles that graze these vital carbon-capturing meadows. The importance of managing healthy tiger shark populations is no longer just a theoretical idea; their survival is linked to ours. 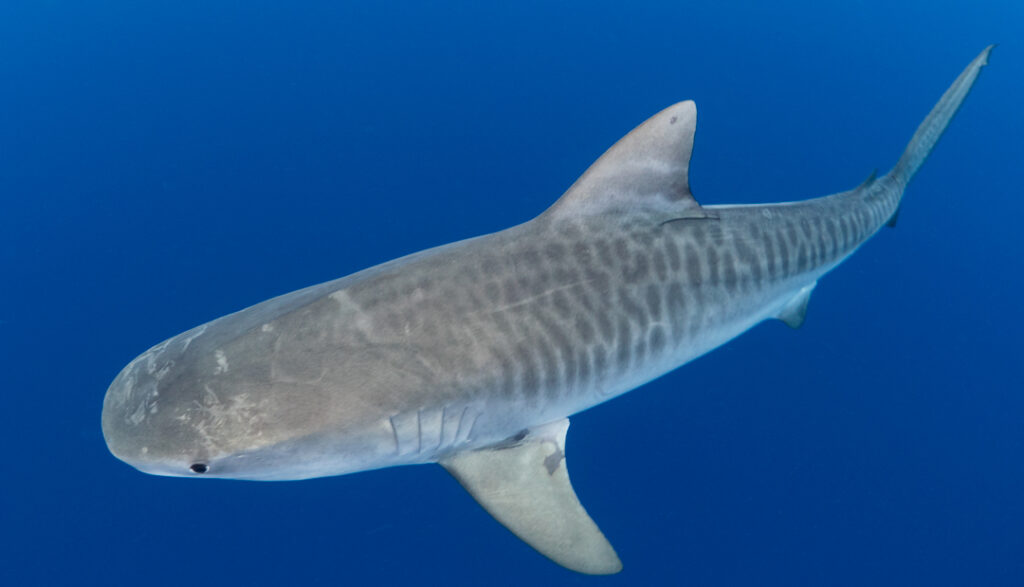 Tiger sharks in Mozambique have been recorded travelling thousands of kilometres to the other side of the Indian Ocean, but are genetically distinct from those in the Atlantic. Photo © Nick Filmalter

The conservation relevance of genetic research

We track tiger sharks as they move around the world, we study their behaviour and diet and we try to monitor their numbers. For sharks that lead such large lives, what help is it for scientists to go to the smallest scale, that of their genes?

The SOSF-SRC itself focuses on using cutting-edge science to improve the conservation of sharks and rays. Its speciality lies in using genetics to understand these species and apply new knowledge to improve protection for them. As the director of the research centre, Professor Shivji has to consider what shapes its mission. ‘A guiding principle for our work is to focus primarily on shark species that are of high conservation concern,’ he explains.

‘We spread our work across both discovery research questions (for instance, understanding how sharks function) and applied conservation research (for instance, understanding interactions between shark migration patterns and fisheries or investigating trade in shark parts). The important point is that all of this information advances our knowledge of sharks and informs conservation.’

We understand that tiger sharks are important players in the ocean system and that their nomadic way of life throws them into the path of fishing vessels as they traverse large distances. In part, what makes Sereia’s journey so phenomenal is no longer only that it seems physically impressive to us, but that her encounters with humans on her path allowed her to reach her destination. The home of sharks like Sereia is also changing rapidly; climate change, pollution and habitat destruction mean that for species to survive, they need to adapt – and fast. ‘Overfishing poses a clear danger to sharks: the genetic diversity in overfished species will inadvertently be diminished and they won’t adapt to the fast pace of environmental changes,’ confirms Professor Shivji. ‘A key factor that will strongly influence species’ resilience and survival into the future is their genetic diversity – a bedrock biological property that underlies the ability of species and populations to adapt physiologically to changing environments. In this era of rapidly changing ocean conditions, preventing the loss of genetic diversity in wildlife becomes even more critical to allow species and populations to adapt and thus remain resilient. A major concern is whether long-lived species such as sharks, which have evolved over millennia, will be able to adapt quickly enough to keep pace with ongoing rapid changes in the environment. In this situation, the greater the genetic diversity available for evolutionary selection to work on, the higher the probability that at least some populations within species will adapt and survive.’

What is different about these findings?

Researchers in this study could scrutinise the structure of tiger shark populations at a finer resolution than previous studies that had first shown these results. Instead of being reliant on mitochondrial DNA (the DNA found in the energy-making mitochondria that power our cells and are inherited only through mothers), this study used genome-scale (the full genetic information apparent in an individual) single nucleotide polymorphisms (SNPs). ‘SNPs repeat across the entire genome,’ explains Professor Shivji. ‘So this increases the amount of information for geneticists to work with relative to previous surveys that were limited to small subsections of genetic information.’ The result is much higher precision in distinguishing which tiger shark populations are genetically distinct. 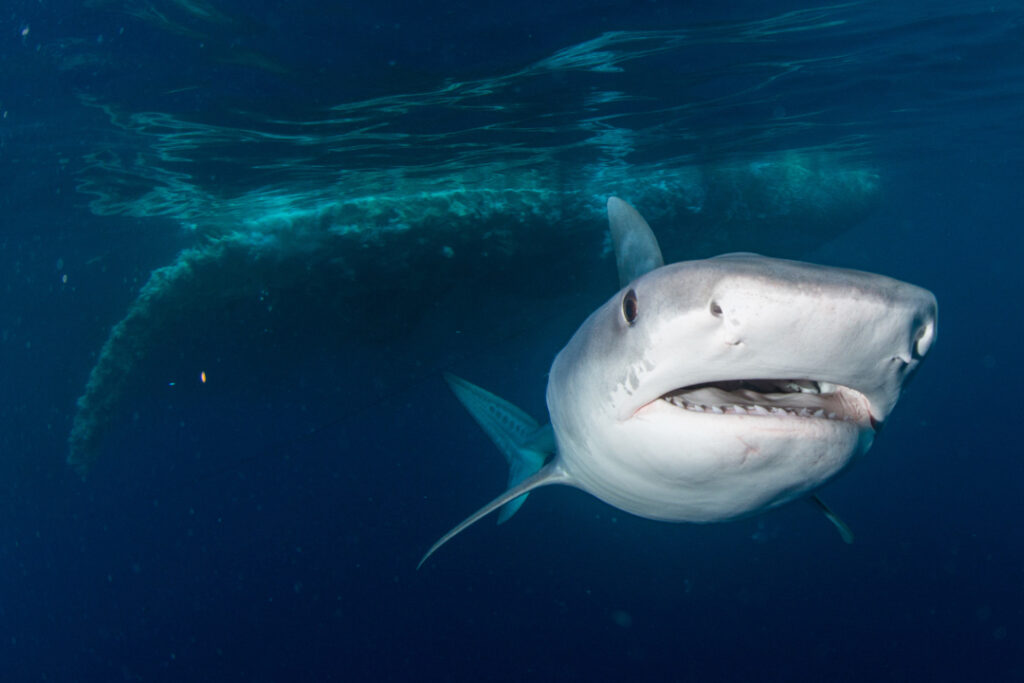 A tiger shark in the Western Indian Ocean scavenging on the carcass of a sperm whale. Tiger sharks have an incredibly varied diet, and have a reputation for trying almost anything. Whale carcasses however can be considered a tiger shark delicacy. Photo by Ryan Daly | © Save Our Seas Foundtion

What do these findings mean for tiger shark conservation?

With what we now know, the Atlantic and Indo-Pacific tiger shark populations will need tailored management plans and, concludes Professor Shivji, ‘targeted conservation efforts to preserve their genetic diversity and potential to survive rapid changes occurring in our oceans’. The study recommends that international fishery management of tiger shark populations consider the Atlantic and Indo-Pacific populations as separate and that a targeted conservation plan is devised for Hawaiian tiger sharks.

And where to from here?

Professor Shivji and the SOSF-SRC have been working on tiger sharks for many years and they have no intention of stopping right now. ‘Tiger sharks are an unusual species in an evolutionary sense, which makes them interesting to “decipher” at a whole genome sequence level,’ says the professor. ‘As a next step we plan to sequence and characterise the whole tiger shark genome to assess what makes tiger sharks such evolutionary novelties. The SOSF-SRC continues to work on the population genetics and genomics of other sharks of high conservation concern, including great hammerhead and shortfin mako sharks.’

The more we know about sharks, the better we are able to refine our own behaviour, policies and management interventions to suit their particular challenges. If our understanding of tiger sharks had remained that populations are similar wherever they are found across our oceans, we might have stood to lose their true diversity and undermined their resilience as a powerful and ancient species.