Situated along the outermost islands of the African country of Seychelles lies the remote D’Arros Island and St Joseph Atoll, an area highly abundant with various species of fish. Habitat wise, D’Arros and St Joseph are home to 15 of the International Union for Conservation of Nature’s Red Listed species, including the endangered humphead wrasse (Cheilinus undulatus), one of the most commercially valuable reef fish in the world.

Humphead wrasse are capable of growing up to six feet and can weigh more than 400 pounds. These iconic reef fish are important for tourism and fisheries as well as the health of coral reef ecosystems. However, in terms of shallow coral reef fish, humphead wrasse reach sexual maturity at a late age and reproduce slowly making them vulnerable to overexploitation. Despite the importance of these charismatic animals, knowledge of their movements and habitat use (information crucial to developing effective conservation measures) is limited. 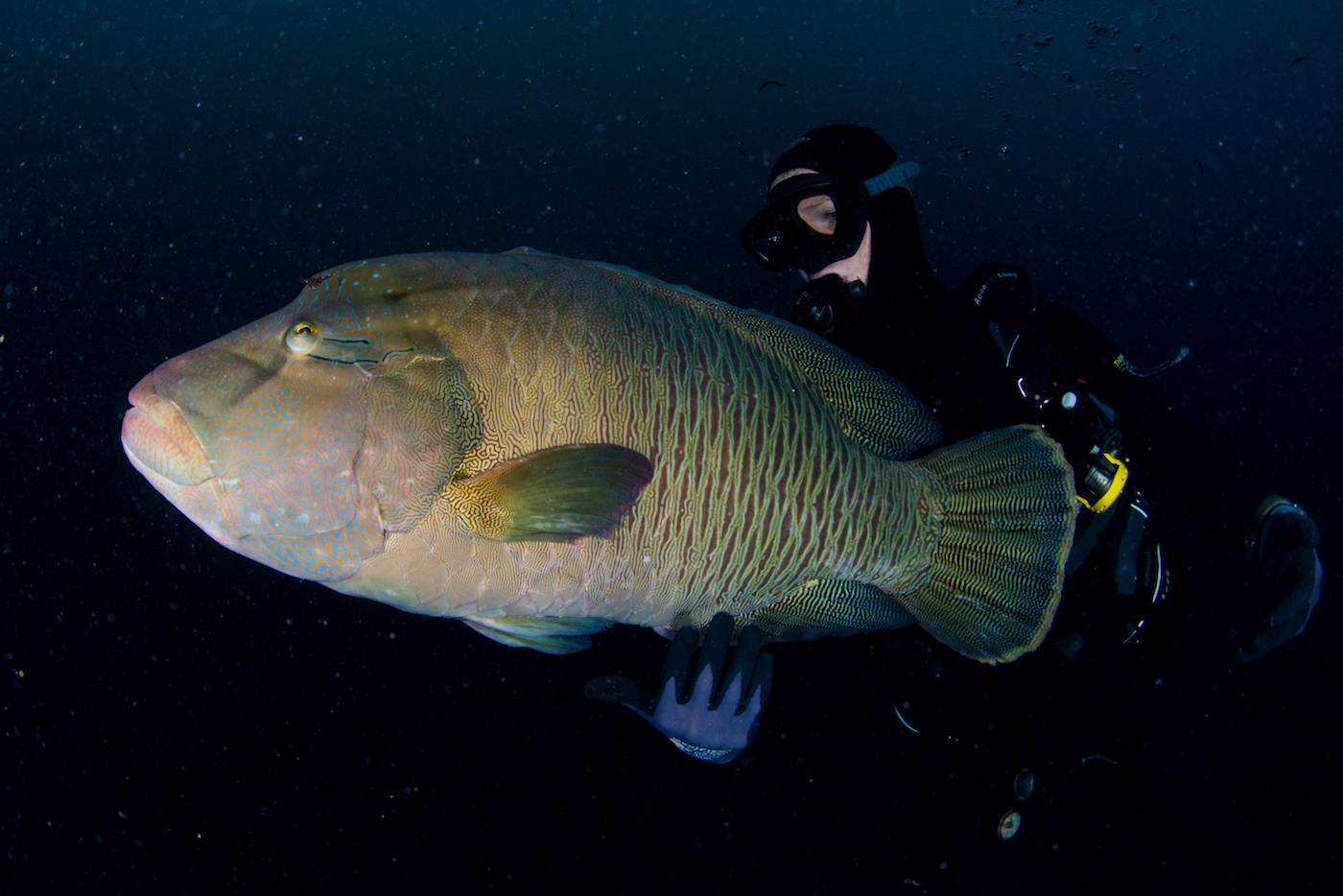 At the SOSF D’Arros Research Centre, Project Leaders, Dr. Kevin Weng and Dr. Andrew Gray have begun working on the first comprehensive assessment of a possible humphead wrasse refuge habitat in the Indian Ocean. Kevin believes the humphead wrasse population around D’Arros and St Joseph Atoll are unique. Initial surveys suggest the waters could be an undisturbed environment in which the species thrives.

In October 2017, Kevin and Andrew along with the SOSF D’Arros team (Ryan Daly, Clare Keating Daly, and Luke Gordon) successfully outfitted 20 humphead wrasse with acoustic tags to generate knowledge on their movement patterns and site fidelity around D’Arros Island and St Joseph Atoll.

‘Right now, there is a strong need to understand the abundance and movement patterns of humphead wrasse in D’Arros and St Joseph’, Kevin explained. ‘By tracking the movements of these animals throughout Save Our Seas Foundation’s expansive Amirantes acoustic array, we can better determine how important the area is to their survival.’

Kevin also hopes that humphead wrasse conservation will have a trickle down effect.

‘Given effective measures are put in place, humphead wrasse can serve as an umbrella species — a sort of ambassador to other reef associated fish’, he said. ‘For example, in D’Arros and St Joseph 15 Threatened species occur. Of those, humphead wrasse are more vulnerable to exploitation meaning a region housing healthy population numbers is likely providing exceptional habitat for the whole community.’

Kevin believes if these environments are protected for humphead wrasse, other species will benefit indirectly. 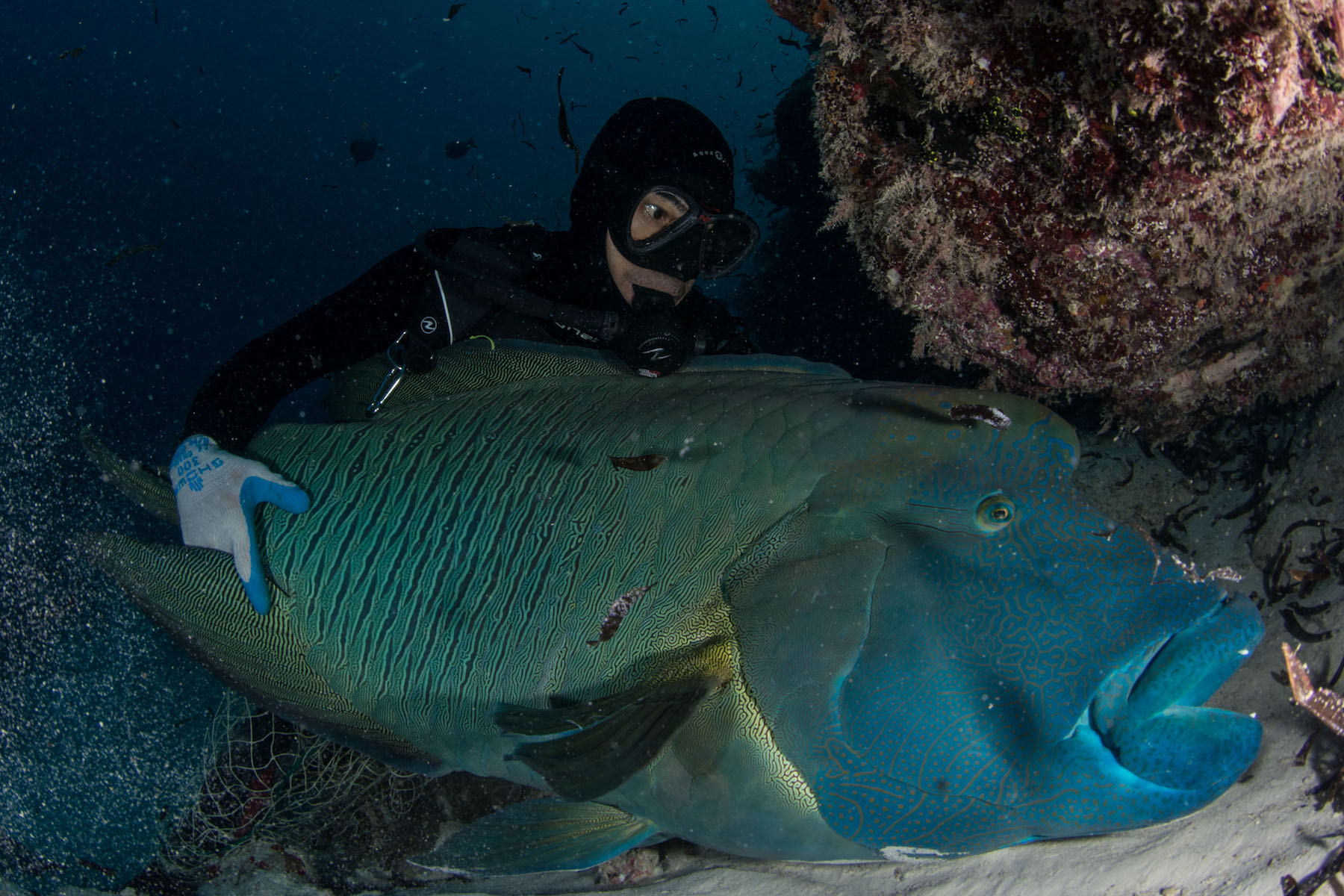 This particular wrasse is the first and largest individual tagged in the Indian Ocean. Photo © Ryan Daly

Initial results from the study suggest that tagged wrasse depend on specific areas of D’Arros and St Joseph for refuge.

‘This information is exciting as it highlights the importance of D’Arros and St Joseph for these endangered fish,’ Kevin concluded. ‘Over the coming months, we will continue to collect data which will aid in the effective management of these breathtaking animals.’