Eight Aldabra giant tortoises have settled into new lives on D’Arros Island after they were transported from Mahé last August.

The adult tortoises – three males and five females – had been residing in pens on the main island, and although they were deemed to be in good health, the prospect of releasing them freely into a new environment was an opportunity the Save Our Seas Foundation (SOSF) and its D’Arros Research Centre (DRC) could not pass up.

Following a two-week quarantine period and their gradual release onto the island throughout September, they have since successfully integrated with the 21 existing tortoises on D’Arros. 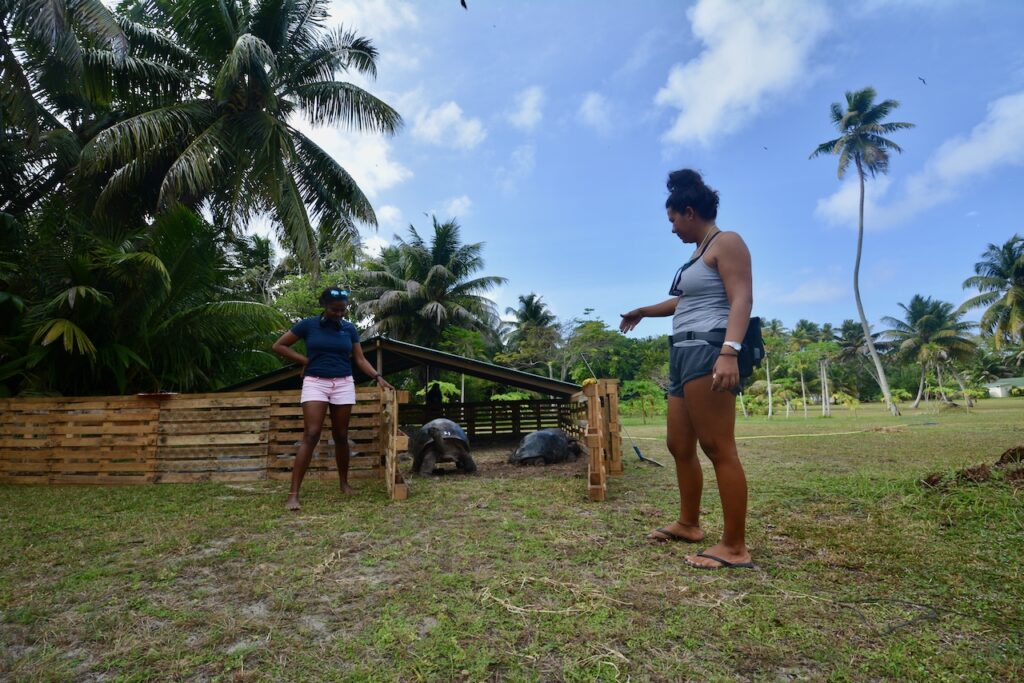 According to the SOSF-DRC Program Director Henriette Grimmel, the free-roaming tortoises are an important part of daily life for the island’s small community, and although the SOSF’s worldwide research is largely focused on sharks and rays, the connection between marine and terrestrial conservation in the outer coralline isles cannot be overlooked.

“Land-sea interaction is continuous, and the giant tortoise is an iconic and threatened species endemic to Seychelles,” Grimmel said. “If D’Arros can facilitate a natural facet of Seychelles’ ecology, that must form part of our conservation mission. These tortoises are also an important part of our community, we know each individual and character and many of us on the island have our favourites.” 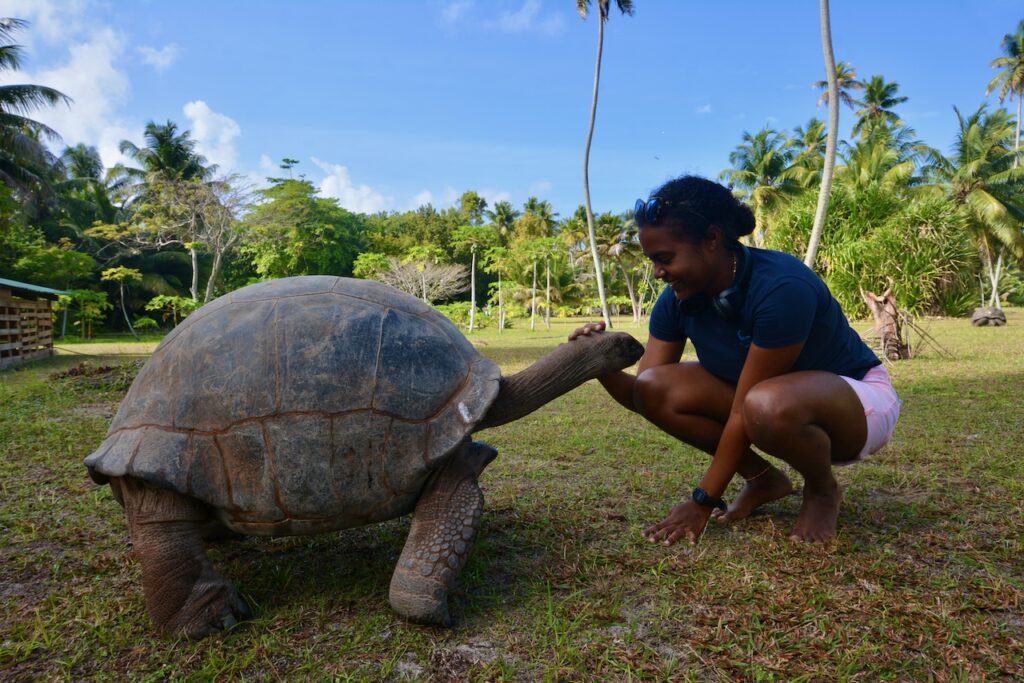 The first released tortoise getting some attention from Research Assistant Dillys Pouponeau and as the first to walk into freedom, aptly named "Freedom". Photo by Henriette Grimmel | © Save Our Seas Foundation

Giant tortoises were first brought over to D’Arros in the mid-1970s with just 7 individuals on the island initially. In more recent decades, the population had levelled off at around 20 and had been stagnant for some time.

The exact reason for this is unclear, however Grimmel hopes that the new arrivals can be beneficial to the overall population, in part through the addition of more genetic diversity. So far, indications are that the new tortoises have intermingled and mating has been frequent.

Checking and observing the tortoises, which have now all been marked and numbered, is part of the weekly routine on the island, one in which D’Arros Island Manager Andy Michel and his wife Noella have a particularly deep connection.

As D’Arros does not have a hatchery, Andy had taken it on himself to nurture two smaller tortoises – Ralph and Phouset – that had been found around the time he arrived on the island in 2018. He built a pen next to his house to protect them from predators and other dangers, but with the tortoises now having grown larger, and a commitment to allow all of the tortoises the freedom to roam, he acknowledged it was better to set them free together with the new arrivals.

“It has been heart-breaking,” Andy said. “We raised them like children and enjoyed having them close, but I think it’s better for them to be out in nature.” 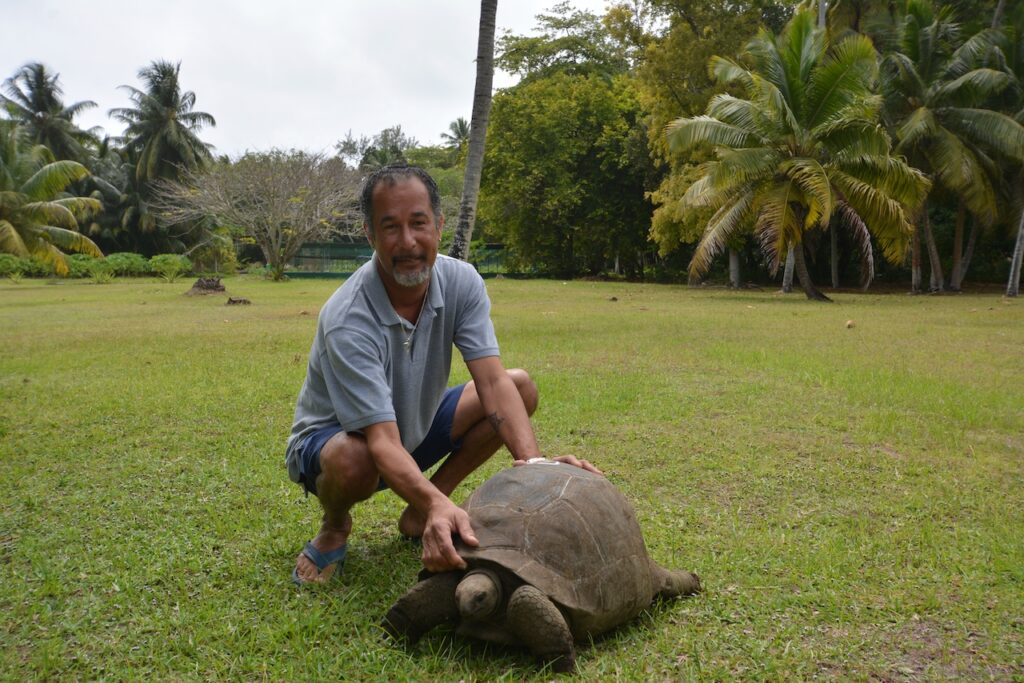 Island Manager Andy Michel with "Ralph" - the tortoise he and his wife took care of for the last few years. Photo Dillys Pouponeau | © Save Our Seas Foundation

The first tortoise that walked out of the quarantine pen and into its new environment was fittingly named Freedom. As more were gradually released, the entire island community began to settle into their own unique routines.

Among the new arrivals, the older male Jeffrey is living by the airstrip and the beach, and not unlike human elders, seems to prefer peace and tranquillity rather than the company of other tortoises.

By contrast, the other two new males, Aqua and Oscar, have both acquainted themselves with the local female population. And with the tortoises that the Michels raised penned in no longer, the entire Save Our Seas Foundation D’Arros Research Center team hopes a happier and healthier tortoise population will result in a more authentic Seychelles outer island ecosystem. 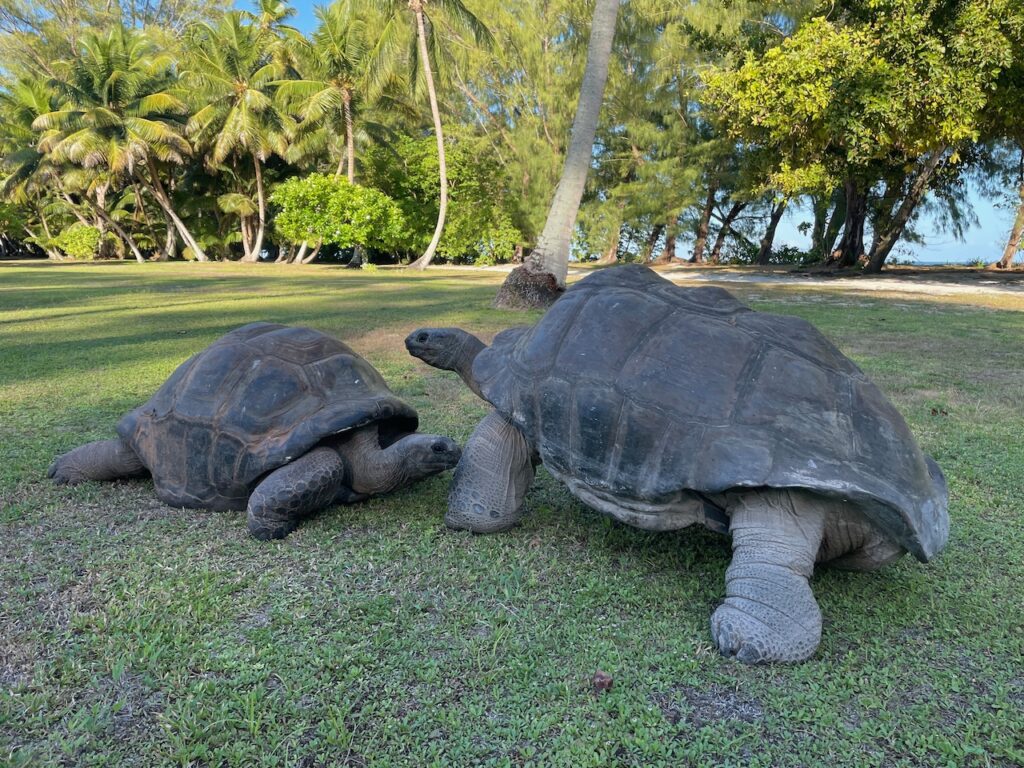 Local "P-2-4-" - the biggest guy around checking out "Aqua" - the gentle soul of the new guys. Photo by Henriette Grimmel | © Save Our Seas Foundation