Photo by Malini Pittet | © Save Our Seas Foundation
By Eric Schneider, 31st March 2017

Due to the high quality of the natural environment and the resulting abundance of many types of animals on D’Arros Island, interactions between species are often observed and even photographed.  Recently, several predation events have been captured that highlight some of the interesting food webs present in these dynamic terrestrial and marine ecosystems.

Recently, a resident grey heron (Ardea cinerea) was photographed swallowing a fledgling fairy tern (Gygis alba, also known as the white tern) near D’Arros Research Centre.  While commonly found wading in the shallows hunting for fish, this large species of heron is an opportunistic predator.  Fairy terns hatch on tree branches on D’Arros Island, and without the protection of a nest, the young bird was caught by the heron. 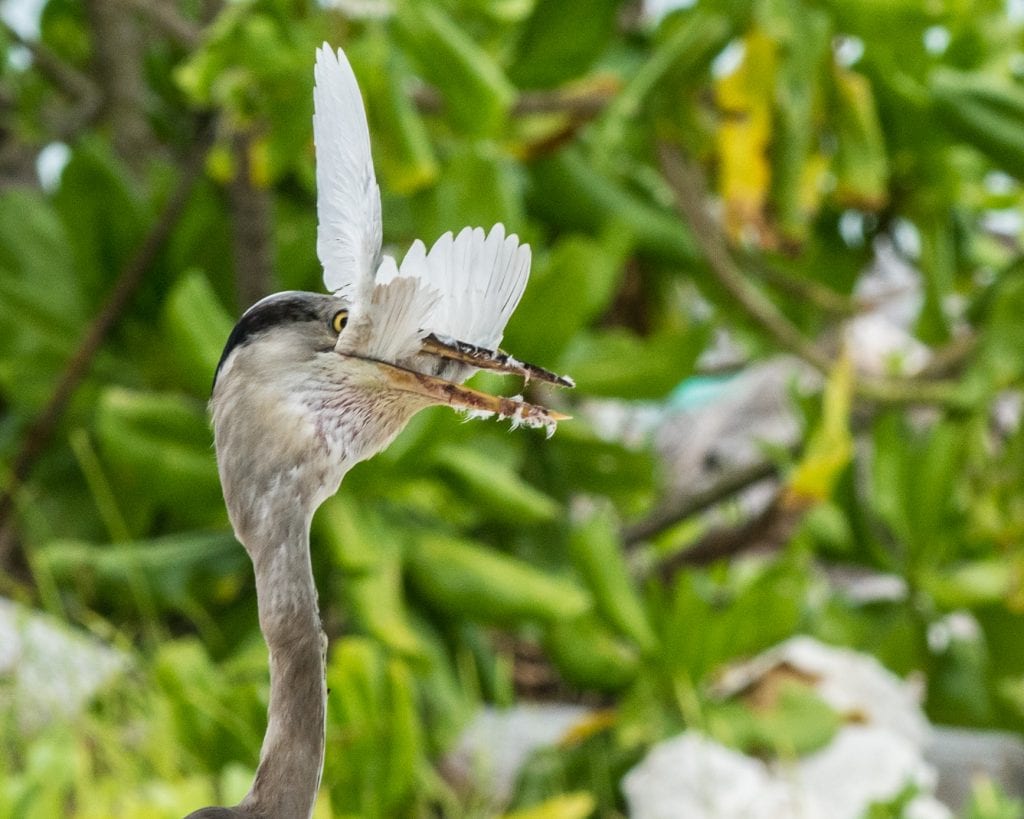 An afternoon snack for a grey heron on D'Arros Island which supports healthy populations of both predator and prey. Photo by Ryan Daly | © Save Our Seas Foundation

During an early morning beach walk on the west side of D’Arros Island, a horned ghost crab (Ocypode ceratopthalmus) was seen eating a hatchling hawksbill turtle (Eretmochelys imbricata).  The peak nesting season for hawksbill turtles on D’Arros Island is October through January, and upon emerging the hatchlings make a quick dash for the sea.  Ghost crabs and shore birds frequently take advantage of this event in hopes of capturing a meal. 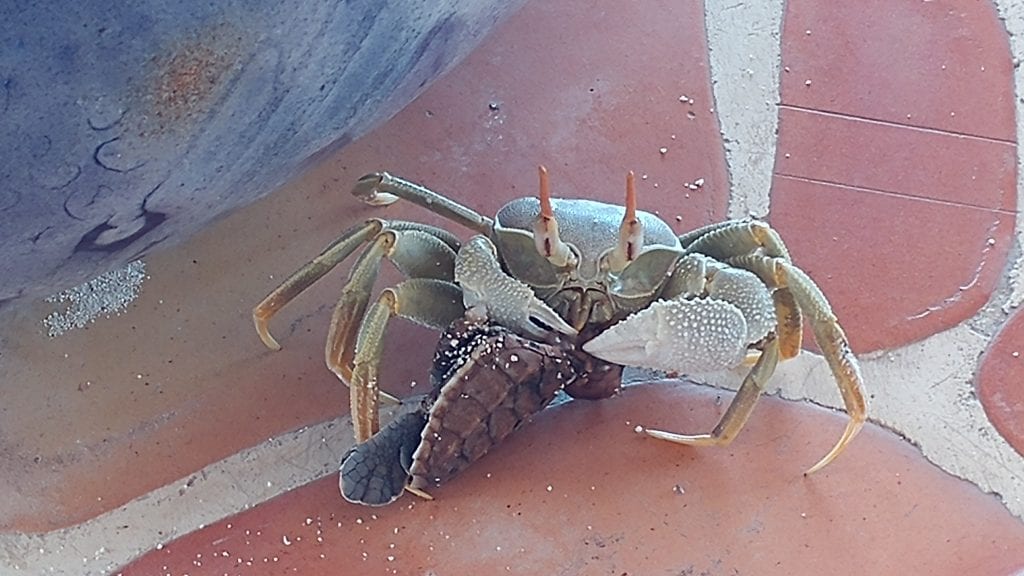 A horned ghost crab eating a hachling turtle on D'Arros Island. Photo by Eric Schneider | © Save Our Seas Foundation

Earlier in the month, the same species of ghost crab was observed eating a juvenile convict surgeonfish (Acanthurus triostegus), a common near-shore reef fish.  While it is possible that the crab captured the fish in shallow water, it may have also washed ashore or been dropped by a bird (thus making this a scavenged meal). 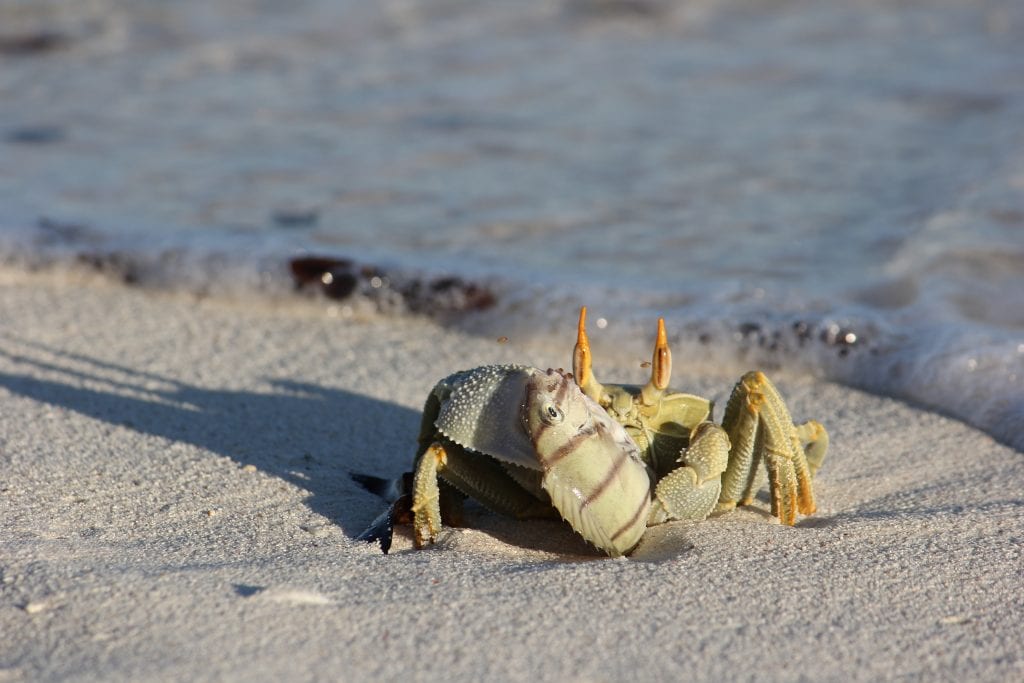 Likely a scavenged meal, a horned ghost crab samples the delicacies left behind on an outgoing tide, in this case, a convict surgeonfish. Photo by Clare Daly | © Save Our Seas Foundation

On a trip to nearby St. Joseph Atoll, a fairy tern had just returned from feeding and was perched on a coconut palm frond.  These small, agile terns pick small baitfish out of the water that they either eat themselves or bring back to feed to their chicks.  This individual has captured several baitfish, possibly hardyhead silversides (Atherinomorus lacunosus). 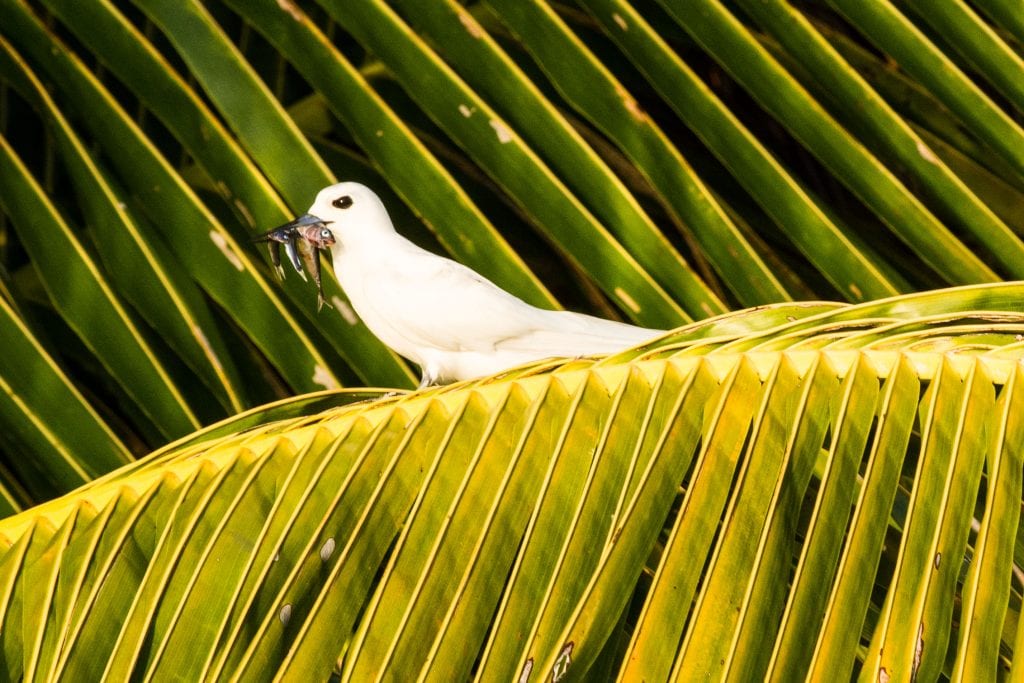 An adult fairy tern returns with an evening meal after foraging at sea during the day. Photo by Ryan Daly | © Save Our Seas Foundation

Not only are these interactions interesting to watch, they are great examples of the interconnectedness of the land and sea.  Numerous species rely on both of these habitats for survival: grey herons and fairy terns nest on land but predominantly hunt fish, sea turtles forage in the ocean but must lay their eggs on a beach, and ghost crabs spend their time in the intertidal zone after an oceanic larval phase.  These complex life histories and food webs give ample reason to take a wide approach to conservation in the Seychelles.